“If you really care, why should I have to tell you my name twice?” 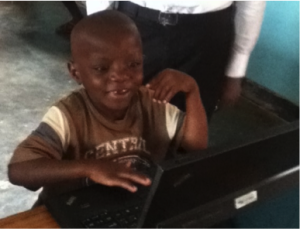 He never went to the street like other kids served by RDDC, but he wished he could just to escape from being tortured by his father. One day, he was taken from his home to the hospital after he was beaten unconscious by his father.

After medical treatment, Omar didn’t have anywhere to go. Omar was brought to FidesCo’s Centre for Rehabilitation of Street Children in Kigali, and this is where I met this sweet kid while I was supervising the IT Class. Omar was one of the newcomers at the Centre. I approached him and asked his name. Then I sat down and this conversation started:

“My name is Omar,” he replied.

Omar asked me my name in return.

“My name is Eugene,” I responded.

“Hmmm,” replied Omar.  Omar was playing with a little doll given to him by one of the staff working at the FidesCo Center.

“Don’t you see that I am taking care of this little baby?” Omar said showing me the hair of his doll.

“Oh, interesting. Whose baby is this?” I asked.

“I don’t know, I am just taking care of her in the absence of her parents.”

“It is good what you are doing,” I replied.

Then Omar asked me the following profound questions, although I was not entirely aware of their deeper meaning at the time.

The weight of these questions did not hit me until I met him again.

It was 5:00pm and I had to leave Omar. The next week I found him again sitting alone under some bamboo trees watching his peers playing soccer. I sat down and asked him his name again just to initiate the conversation.

“I don’t like to tell someone my name twice,” responded Omar in a hostile tone.

Omar said, “I know that people like you don’t really care about names.”

“People like me?” I said, startled by his reaction.

“Yes, you don’t really care. And even if you pretend, you don’t care about how I feel inside. Even my father doesn’t remember my name,” Omar said.

Omar also added, “Just tell me sir, if you really care, why I should give you my name twice?”

This conversation really stuck with me and I could not stop hearing his words in my head.

He is an RDDC IT student who is concentrated and focused when he is in class. He is happy and he seems to be more open. When it is time for IT class, Omar is one of the first kids to run and hug the RDDC staff and ask if he can help carry their backpacks. He knows how to use a computer, open Microsoft Paint and create a folder without assistance in just his second month attending class. In just this short time, he has come so far.

The resilience of children is incredible.