“A Gift has Arrived from the USA, and it all Started from Rebecca Davis Dance Company“ 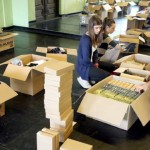 The management and the members of the dance group of Osijek’s National Theatre had their hands full – but full of doing wonderful tasks. They had to open, look over, classify and take care of the contents of many boxes that had just arrived from the USA.  In those boxes were donations of ballet clothing and footwear costing approximately $51,724.

Much of the credit for this extremely worthy donation goes too Vuk Ognjenović, the Artistic Director of the dance group and ballet studio of the Croatian National Theatre in Osijek.  This is indeed a huge remedy for ballet. It has been more than a year and a half since from the beginning of this idea to its realization.

Ballet artist Rebecca Davis from Philadelphia was in Osijek three years ago on the premiere of Osijek’s Peter Pan ballet. She was than acquainted with the situation, including: the war in Osijek, the falling apart of the ballet ensemble, and the need for funds. Already at that time, she promised to help.  Some time passed and Rebecca came again, a year and a half later.  By then, she was working in Bosnia and Herzegovina in a humanitarian program with her Rebecca Davis Dance Company.

Rebecca put Vuk in touch with Elaine Sisler of  the Dance Guild Association, which is engaged in promoting the culture of dancing in America, but which also helps those lacking funds. “They examined our website, saw it was a serious work, and decided to help,“ explains Ognjenović. He also acknowledged that he wasn´t expecting such a huge donation.  “We were only informed that a great number of things are arriving from Massachusetts, which have been collected for a year and a half.“  Sisler’s organization also created a fundraising concert for the dancers in Croatia and Armenia. Half of the donation went to Armenia, and the other half went to Osijek.  He emphasizes that Mirena Bagur, the president of the Friends of Croatia Association, from Boston, provided the transportation money, and Berislav Šipuš, the Deputy Culture Minister took care of exempting the shipment from the customs duty. The theatre manager, Božidar Šnajder, also endorsed and helped the shipment.
Vuk said, “They [Sacred Dance Guild] sent us really everything – character shoes, pointe shoes, soft shoes, dresses, tights, leotards, and dancing socks. The best of all – the clothing and the shoe wear – are of all sizes and of famous and good quality brands, such as Capezio, Grishko, Bloch and others. I believe that we will be able to dress up all of our members, momentarily counting around 12, as well as 30 apprentices/students of the ballet studio, aged from 10 to 20.“