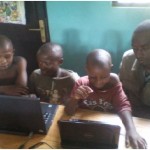 “These street kids told me that they never knew that one day in their lifetime, they would get a chance to learn how to use a computer.”

Since their first days in IT class, in the beginning of March, both boys captured my attention. They both seemed not to be interested in IT; they both went outside in the middle of IT class. I followed them, trying to figure out why these two kids were not interested in IT.

“It is too boring, I prefer to play outside,” said Jean de Dieu.

Kwizera didn’t tell me why he preferred to stay outside of IT class. Kwizera is too quiet. The next IT class, I was surprised to see them in the class.  They were excited to learn, and they were asking permission to touch the computer. I asked them why they changed their decision and chose to attend IT class.

Jean de Dieu responded with an illuminating smile on his pretty face: “My colleagues told me that, last time, they were given a chance to touch those computers. I lost that chance, so that’s why I am here. I want to get that chance too,” he said as he was pointing his finger to the five laptops on the table. Jean de Dieu also added that if we let him touch the computer each time he comes, he will be attending every IT class. Kwizera was still quiet, but very attentive to my conversation with Jean de Dieu.

On Friday, both kids came to see me before dance class started and apologized for missing the first day of IT class. They told me that they never knew that one day in their lifetime, they would get a chance to learn how to use a computer.

For the first time, Kwizera shared what was on his mind: “In my first day in IT class, when the teachers started to tell us history about the discovery of a computer and its evolution, I was not interested with that history.  All I wanted was just to touch a computer and to know how I should use it. I thought that nobody should let me touch a computer in my whole life,” Kwizera said. 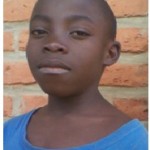 When I was trying to ask them the reason why they think learning IT for them is important, Jean de Dieu responded in the following deeper words: “I think I will get respect from all my family members because I know how to use a computer. My father will never beat me again and my brothers and sisters will need me to teach them what I learned about IT.  My mother will be proud of me.”

Kwizera added: “The knowledge I am now getting in IT class will encourage me to buy my own computer once I become old, and I will be able to work and earn enough money.”

At the end of my conversation with those kids, I asked them what they leaned in IT during the two weeks. I was so surprised to hear them explaining to me the basic notions about computer. They started by telling me how to power on a laptop, then open Microsoft word – which they pronounce as “Microsoft woni” – Microsoft Paint, writing their names or drawing something, opening a folder, and saving their document before they shut down the computer.  These two children have already changed – and this is just the beginning of their time with RDDC.