The Diary of a Street Child: Case of Jean Damascene Ntawukuriryayo 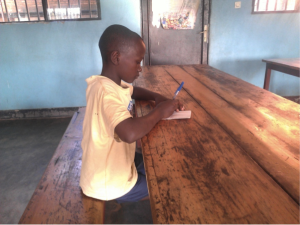 Writing this article was an inspiration from the common question I have been asked by different persons who visited the RDDC dance program a few months ago. Those people were interested to know what the diary of a street child looks like. Many times I responded that I don’t know, but other times I responded that it depends on the kid and his background and the reason why he ended up on the street. Afterwards, I thought it is better to ask RDDC students in order to get a clear response for next time.

Most of the responses I got from kids were similar: “On the street, the main question you ask yourself is how to find something to calm the stomach. Clothes, having a shower, a place to sleep – those things don’t matter a lot. Only food matters, whether you steal or beg for it. Then comes the moments you feel depressed. You take some drugs (glue, illegal alcohol, cigarette, cannabis, etc) to be able to sleep peacefully, regardless of the place and its cleanliness.”

But for one child, Jean Damascene Ntawukuriryayo, the response was different. This child knows what he wants in his life.

“It is true that I am worrying about food as well. But that is not what is shaping my diary schedule,” said Damascene. I was so surprised by the response that I said, “What?” Damascene added that finding a paper and a pen is his first task; finding a calm place where he can write down his thoughts is the second; and then he comes back to the thought of food and other distractions. Captured by the smartness of that boy, I asked him to describe his diary life on the street. The following is his response:

“As I said, in the morning I was looking for food but I was thinking about my studies and my future. I went on the street with the hope that one day I will find someone who should help me to go back to school. But once on the street, I realized that was an illusion; I thought I should get some papers and write down my songs and theater plays. I thought that one day I should find someone interested and sell my compositions, and that could help me to survive and may be to get some money to go back to school. I was in P5 (Fifth Grade) before I left home. I left home because my grandfather didn’t want me to go to school.

“On the street, we used to fight every day – just for respect or for no reason at all. Waking up doesn’t exist on the street; it seems that you never fall sleep at all. That’s why, most of us think that taking a drug gives us strength and helps us to endure the struggles of the street. You can’t find food every day. I used to eat once in three days and try to find something to capture my attention. Writing, singing and thinking about the future gives me much more strength and the courage to survive.”

At the end of our conversation, I asked Damascene what he wanted to become in his future. With a smile and shaking his hands as he use to do when he is excited, he told me that he wants two things in his life: to study medicine in order to become a doctor, and to build a driving school for street children.

Damascene is one of RDDC top students in the IT and Lighting Design programs. He is  trying hard to get RDDC sponsorship and go back to school – thereby realizing his dreams.