Life After The Street: Case of Fils Nzabahimana 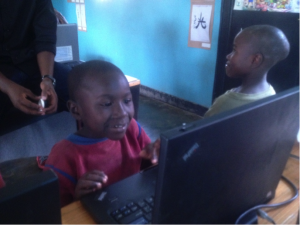 “I am feeling very good because I eat every day and I can use a computer. Now, I don’t worry anymore about the sun.” – Fils Nzabahimana, RDDC Student & Former Rwandan Street Child

Fils Nzabahimana is a very curious young boy. He is always asking many questions about the Internet and life in general (religion, life after death).  Last week, Fils didn’t attend RDDC dance class because he was “not in a good mood”.  I joined him outside the dance class while he was sitting alone, contemplating the sky. I asked him what he was watching in the sky. “I am amazed by those eagles in the sky, do you see them?” said Fils.  I said, “Oh yes, those birds are so amazing.”  And here started my conversation with this smart boy…

“I am five years old,” said Fils in response to my question.

Eugene: How did you end up on the street?

Fils: I was tired of getting bitten by my father.  I decided to join other kids on the street.

Eugene: How does it feel to live on the street when you are as young as you are?

Fils: Oh very bad.  The hunger and the sun are the biggest threats I faced on the street.

Fils: Yes, the sun was my Enemy #1.  When you are on the street you have to eat, the first place you hope to find food is in the trash can. When you don’t find it, you pray, asking the lord to show you someone who will throw a piece of a cigarette, or a friend who can be compassionate and share the glue or cannabis.

Eugene: Are you telling me that you took those drugs on the streets?

Eugene: Then how is the sun your biggest enemy?

Fils: When you take those drugs, you can’t walk under the sun. It feels like your body is burning inside and outside. All you have to do is find a dark place and sleep until night, which is the hardest and most challenging time to find food. During the night, restaurants and the market are all closed, and the police is patrolling, looking for bad people. It is too dangerous!

Eugene: How do you feel now?

Fils: Because I eat every day and I can use a computer now.  I don’t worry about the sun any more.

Fils is a regular RDDC student; he is smart and motived in IT. He earned 85 out of 100 in his IT test last week. Fils can open Microsoft Paint, draw and save his document without any assistance from his teacher. When asked about his future, his response is the same all the time: he wants to become a president and lead more than one country. 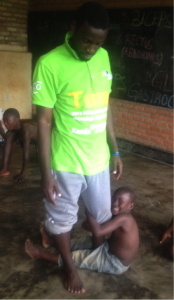