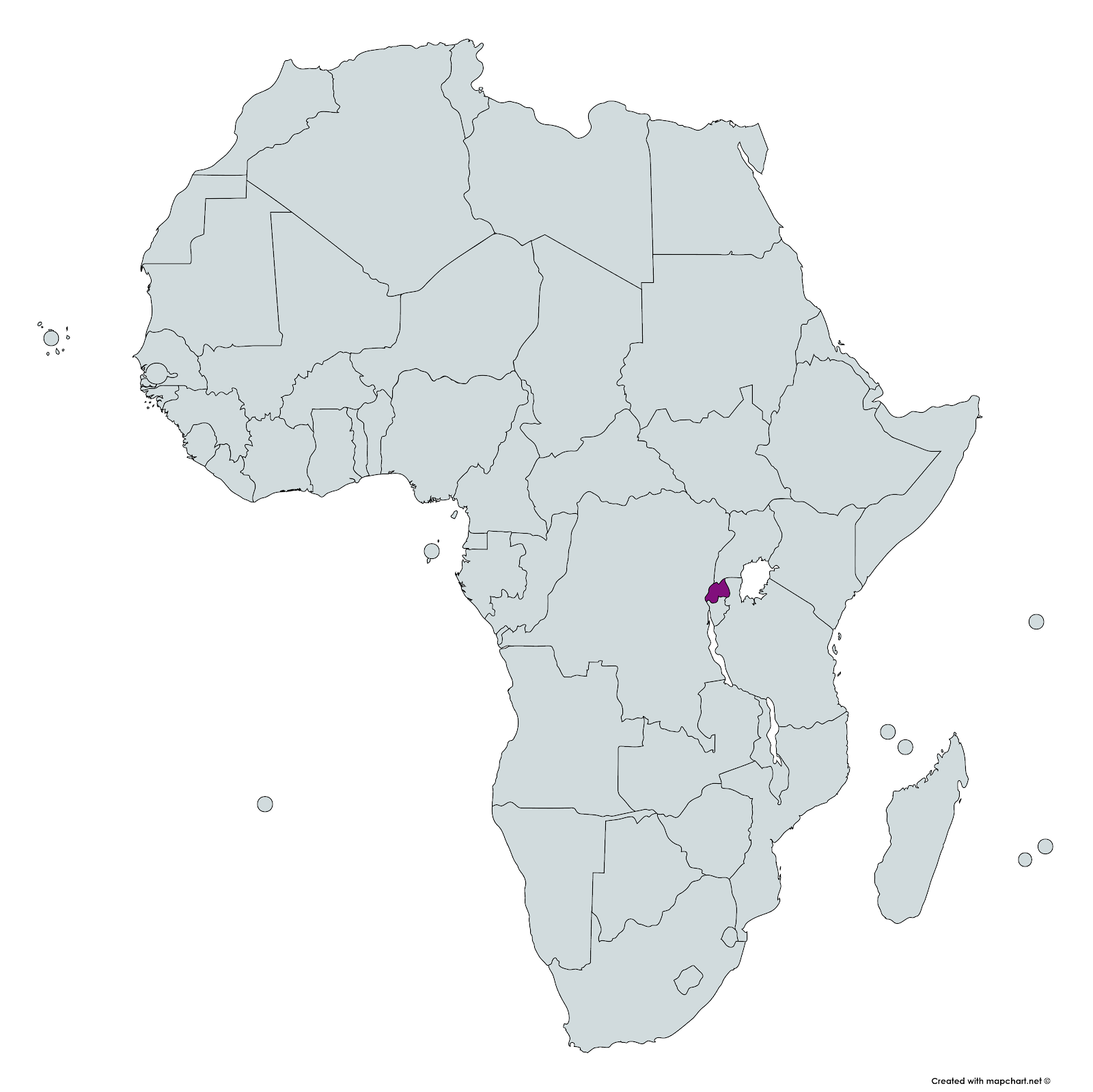 Primary school age (7-14 year old) children are out of school.

Of the poorest quintile of children are out of school, the highest percentage in Rwanda.

The aftermath of the 1994 Genocide Against the Tutsi is still being felt in Rwanda. More than one million Rwandans were killed in the hundred days of the genocide, leaving Rwanda one of the poorest countries in the world. Its social, political and economic structures were destroyed. Though dramatic strides have been made in the nation’s recovery, there are still children in great need.

Over one million children in Rwanda live in extreme poverty (UNICEF 2018). These children are illiterate, lack clothing and barely manage to eat once a day. MindLeaps began working with vulnerable youth in Rwanda in 2010, and opened its own permanent center in Nyamirambo, Kigali in 2014. Since its opening, the center has served over 1,500 out-of-school and vulnerable in-school youth in its safe, supportive space. Ally is an adorable kid. He is quiet and attentive with a hard working spirit and a deep desire to learn. But for much of his life, he did not have the opportunity to learn.

Ally’s mother died and his father went missing when Ally was very young. Due to extreme poverty, he had to drop out soon after starting primary school. He didn’t even finish the first term, which meant he couldn’t even write his own name. Ally spent his days searching for charcoal to sell so he could buy food. At night, he slept in a sewer.

MindLeaps teachers first met Ally in 2013 and invited him to join the dance program. He started coming to classes, but seemed so unhappy at first. The teachers gave him encouragement and support for all his hard work in the dance classes, and over time Ally began changing. His spirits picked up, and he was motivated to work hard in all his classes. He saw that dance steps he hadn’t been able to do at first were now coming easily to him. He understood more English and discovered a love for computer classes. He saw that all his effort was appreciated and was making him a better dancer and student. Ally loved his dance, English and IT classes at MindLeaps, and became one of the best students. He was ready and eager to go to school. All he needed was a sponsor for his boarding school scholarship.

In 2015, Ally got that scholarship from Misty Copeland, the first African-American Principal Dancer for American Ballet Theatre. Ally was selected because he was one of MindLeaps’ top performing students in all classes, and the data on his cognitive and behavioral skills development showed that he had reached a level where he could succeed in a formal school environment. Ally was excited to visit OrpCare Boarding School with Misty Copeland, and thrilled to restart his education. He began his schooling in 2016 and scored an incredible 85% in his first term, making him the top student in his class. Girls face particular challenges, especially when they are forced to drop out of school. With no clear alternatives, many fall into prostitution and/or teen pregnancy. They are uneducated, have no vocational skills, and can suffer from a deep sense of worthlessness. MindLeaps is a safe space for them, providing social work and counseling services to address their many needs. Over 50% of the children that come to the MindLeaps center each day are girls. Some of these girls are not in school and some are in school, but at risk of dropping out. They follow the same dance, English and IT program as the boys to develop their cognitive and behavioral skills. In addition, these girls take part in our Academic Acceleration Program to help them catch up to the appropriate school level and be ready to enter formal education or improve their current school performance. This Acceleration Program provides the students with English, French, Math, Science, and Social Studies courses.

In 2017, MindLeaps launched Girls LEAD, a project that features and advances the top fifteen girls at The Jim Bell Centre. These girls perform at venues across the country and share their stories of change. These performances are further opportunities to push girls’ confidence to an even higher level by allowing them to showcase what they have learned in their dance classes and to practice public speaking.

The MindLeaps center in Kigali, opened in 2014, has been dedicated to the memory of Jim Bell, a humanitarian, educator and long-time supporter of MindLeaps. His Level 8 Projects, a charity based in Carnoustie, Scotland, has supported the MindLeaps center in Kigali over the years with various capital and renovation projects. The Kigali center has appropriately been named The Jim Bell Centre in his honor.

At The Jim Bell Centre, a nine-member Rwandan staff works with 168 children ages 9 to 18 to provide a ‘catch up’ program for vulnerable in-school children and out-of-school youth who are struggling to become literate and perform well in formal education. The program consists of:

•Dance training to change behavioral patterns and increase cognition
•IT classes to introduce children to technology and the outside world
•Academic Acceleration courses in English, Math, Science, and Social Studies
•HIV testing and treatment, sexual health and reproductive classes, and hygiene/sanitation services
•A daily meal program to improve learning capacity and deter the onset of life-threatening diseases
•School sponsorship to fully reintegrate children into formal education and ensure school completion

At MindLeaps Rwanda, 74-80% of participants are permanently reintegrated into a household and off the street after one year. 70% of MindLeaps students who enter the formal education system perform in the top 20% of their academic classes.

The Jim Bell Centre staff is entirely local and includes male and female dance teachers, social workers and support staff. They understand the challenges faced by their communities, and are important role models for the students, providing emotional support and positive encouragement to build confidence in and out of the classroom. Our LEAPS (Lifeskills Education for Adolescent Positive Sexuality) Program is a sexual and reproductive health curriculum that considers not only the economic issues involved in pregnancy and prostitution, but addresses the complex elements of communication, self-worth, family issues and cultural expectations that affect girls and boys. Focusing on healthy relationships, gender equity, communication and consent is as much a part of this curriculum as puberty and hygiene. Listening to the kids, involving parents and responding to the community are principles embedded throughout the curriculum. The program provides support to MindLeaps youth for both academic education and vocational training. Sponsorship covers school fees, uniforms, supplies, essential meal support and health insurance. In 2021, 172 children are being sponsored to attend primary and secondary schools, and vocational training centers.
To learn more about the program and become a sponsor, go to https://www.mindleaps.org/sponsorship Students receive meals at the Jim Bell Centre daily. Additionally, kids receive workshops to raise awareness of health and hygiene and learn basic sanitation practices. All students receive their own sanitation kit including towel, soap, toothbrush, and sanitary napkins for girls. Plus the Center provides clean water for the students to wash their clothes. March through September 2020, MindLeaps delivered food and sanitation supplies monthly to over 800 students and family members as part of MindLeaps' COVID-19 emergency relief efforts. The permanent center in Kigali is also a hub for programs that reach out into the larger local community. MindLeaps has community workers on staff who conduct home visits to evaluate and provide support for difficult life situations.

MindLeaps also runs an Education and Family Strengthening Program to further identify and deal with challenges stemming from poverty, domestic abuse, and lack of financial planning. When they join MindLeaps, each child identifies a “caretaker” (parent, guardian or older sibling), who is then enrolled in a “Self-Help Group”. These groups come to The Jim Bell Centre every Sunday and receive training in basic business skills. Each Self-Help Group identifies a small income-generating project, and MindLeaps makes modest grants to each of the groups, enabling them to implement their project. The ultimate goal is to help families find a way to support other children in their homes or under their guardianship, so that the impact of MindLeaps goes beyond the individual children receiving long-term school sponsorship from the organization.