In September 2012, Rebecca Davis was awarded a second Fulbright grant.  As a Fulbright Specialist, she traveled to Ukraine to teach American pedagogical approaches to contemporary dance.  Rebecca taught at The Crimean University for Arts, Culture and Tourism in the city of Simferopol.  Over the course of four weeks, she worked with the faculty to develop a curriculum for contemporary ballet and she set five short choreographic works on the students.

All the students laughed.

“Yeah, but it’s so funny when you say it,” they chuckled between their laughs.

Welcome to a new cultural experience.

In September 2012, Fulbright sent me to teach a one-month specialist program at the Crimean University of Arts, Culture and Tourism. However, I feel that I was “slightly unprepared” for my month in Ukraine.  I was based in the capital of the Crimea, Simferopol.  Let’s take three simple examples to prove my point.

#1: Russian.  It’s been seven years since I last spoke Russian, so my use of the language is rusty at best.  Thus, when I completed the Fulbright Specialist Application, I made a point of not indicating Russian as one of my languages.  When I was selected as the grant recipient, I was told, “don’t worry – you will teach in English.  That is the language of instruction there.”

Six months later, I greeted the International Director at the University upon my arrival:

“So, all your students speak English here?” I said.

Note to self: you have zero minutes to remember Russian.

#2: Political Situation.  My second cultural error occurred within 15 seconds of the first – in the same conversation with the Director:

“I have never been to Ukraine.  I am really excited to learn about your country,” I said.

“You are not in Ukraine.  This is the Autonomous Republic of Crimea.”

Note to self: you should have read Wikipedia before getting on the plane.

#3: Age.  Apparently, both the faculty and the students at the university expected someone much older, but they were also in shock that I didn’t have my own family by the age of 30.

“It’s great that you are a young teacher, but where are your children?” my students asked.

“I’m not married,” I responded.

“What happened?” the staff and students asked in unison.

Note to self: bring fake wedding ring next time. 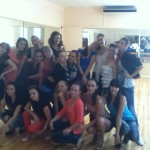 Despite all this, my month in Ukraine/Crimea turned out remarkably well – and eventually, I remembered my Russian.  There were two especially influential experiences: a reminder that the issue of ethnic tension and reconciliation exists nearly everywhere, and dance is always a powerful way to communicate and build bonds between people.

In an effort to recover from my naivety, I learned a lot about the history and political situation of Crimea while there.  The area was formerly a Soviet Republic of the USSR, but Nikita Khrushchev gifted it to Ukraine in 1954.  During Stalin’s regime, many Tatars were expelled from the region while others died during the Great Purges, although the surviving population was permitted to move back in the mid-1980s.  For these historical reasons, there is tension between Ukrainians, Russians, Tatars as well as further divisions within each of those groups.  When I was asked why my dance company works in Rwanda and Bosnia-Herzegovina, I explained that we were interested in using dance as a tool of ethnic reconciliation among children.  I was told, “Then your company should work here.”  Prior to this Fulbright experience, I had never thought of Crimea as a place of ethnic tension.

While I was working with the students at the University, I was amazed to see their insatiable appetite to learn something new.  They trained with me an average of six hours a day in addition to all of their other classes, and when we weren’t dancing, we were discussing what it is like to train as a dancer in various countries around the world.

My students taught me the word, “полюбасу” because it means something like “exactly” in Russian slang.  Whenever I would use a new Russian word, they’d say, “полюбасу”.  And whenever they perfected a new contemporary step, I’d say, “полюбасу.” 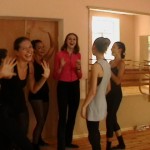 As I reflect back on this experience, I am well-reminded of why Fulbright is a program that fundamentally changes people.  As Americans, we learn about how we are viewed in different parts of the world, and we are reminded that we don’t know how other people live as much as we think we do.  For those people that we work alongside, they see that you can’t teach without learning too.  When we are willing to be both the student and the teacher, both teams win.