Working Toward a Bright Future in Rwanda 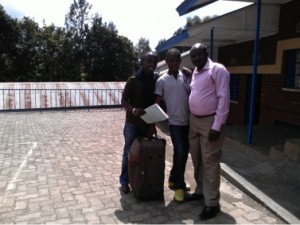 “I know how far I have come and my struggles of the past.  I keep telling myself to work hard and learn many things.  I am looking for a bright future.”  – Jean de Dieu Niyigena, former Street Child

A few years ago, Jean de Dieu Niyigena, known by his nickname “Jado”, was a street child. Through dance and his willingness to change and improve his life, this child was selected by The Rebecca Davis Dance Company (RDDC) to attend boarding school. Now, Jado is growing physically and intellectually. In only one year, he built a great reputation at his boarding school, Sonrise. He never stops to impress his educators and his colleagues.

“Each term, I am impressed by this kid – how he has changed his discipline and his seriousness in everything,” said the matron of Jado. Jado is now on the list of the top ten well-behaving kids at Sonrise Boarding School. Betty, the matron, also added that she is sure the kid will go far in his life.

Friday, October 25th was the beginning of the school holidays. Jado is one of five former street children supported by RDDC to attend Sonrise Boarding School. This child was in the meeting with the head master of the school and his coach when I arrived to Sonrise to take the five kids back to FidesCo Center to pass the holiday period.

“Oh, you are here,” said the coach to me. “We need your permission to take Jado. We need Jado to come back in one week because his sports teams were selected to continue the next part of the championship competition.”

I was so confused if the coach said ‘team’ or ‘teams.’

“Yes, teams – in the plural,” confirmed the coach. “Your kid is multi-talented. Jado is a blessing to our school and we count on him to win these championships in volley-ball, basket-ball and foot-ball,” added the coach.  The coach also confessed that if Jado’s team wins the champion, all the team members will get scholarships.

The annual report marks for Jado indicate that he succeeded and is promoted to pass into the next grade (P4).

“You know,” said Jado, “I know how far I have come and my struggles of the past.  I keep telling myself to work hard and learn many things.  I am looking for a bright future. I will never forget when you visited me in the street children’s transit centre and helped me go to school.”