A Morning at UN Headquarters 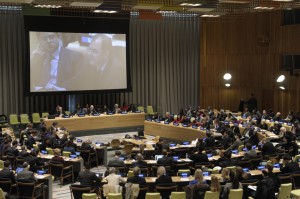 “What criteria are you using to determine that it is not your responsibility to act?”

– Lieutenant General Romeo A. Dallaire speaking about the prevention of mass atrocities

Yesterday, I had the chance to hear Canadian Senator and Lieutenant General Romeo A. Dallaire speak at The United Nations in New York.  Anyone who has studied the 1994 genocide in Rwanda knows of LGen Dallaire: he was the Force Commander of the United Nations Assistance Mission for Rwanda (UNAMIR) during the genocide.  He has also authored the incredibly powerful book Shake Hands with the Devil: The Failure of Humanity in Rwanda.  LGen Dallaire’s speech was part of an UN/Kwibuka event marking the 20th Anniversary of the Rwandan genocide.

“Are Some Humans More Human Than Others?”

LGen Dallaire told a story of when he was held up at a roadblock in Kigali by a 12 or 13 year-old boy with an AK-47.  Here he was, the Force Commander of supposedly the most important international body to end mass atrocities, and in a breath, he could be killed by an illiterate boy carrying a weapon equal to his own body weight.  LGen Dallaire asked us, the audience, “what is the difference between this boy ready to kill me and my own son at home?  Are some humans more human than others?  Is my son more human than this child soldier?”

I think LGen Dallaire is challenging us to recognize (and acknowledge) the imbalance of opportunity that exists for children around the world.  One child may kill in order to get food while another child may be served three meals a day.  The son of LGen Dallaire and the child soldier live in conditions that cause them to act differently, not because their “humanity” is somehow innately different.  During the 1994 Genocide, some children were perpetrators while others were victims.   There was a criterion to determine the child’s fate: the ethnicity marked on an Identity Card.  But, that marking doesn’t indicate if you are human or not – entitled to life or sentenced to death.

From LGen Dallaire’s extensive experience and knowledge, he has concluded that the world is too late for conflict resolution to be effective.  In Central African Republic, South Sudan and Syria, we are wrong and presumptuous to conclude that “our time is now”.  Our time has long passed.  The real political task needed in our new era of intra-state war and failing states is conflict prevention.

To that end, LGen Dallaire emphasized the need for and relevancy of the UN’s Peacekeeping role – especially of Chapter VII Protection (UN Charter Chapter  VII: Action with Respect to Threats to the Peace, Breaches of the Peace and Acts of Aggression) that allows peacekeepers to use force to protect human life.  Another promising initiative is the “Collective Code of Conduct”, which would prevent the use of the veto by the P5 of the Security Council in matters involving mass atrocities.

At this event, Eugenie Mukeshimana gave a survivor testimony.  She suggested the way forward is education.  She (and I) believes that educating youth can help to make people less susceptible to propaganda messages disseminated through mass media.  Studying history and developing critical, independent thinkers is, perhaps, cheaper and more effective than meetings, weapons and boots on the ground.

So, what does that mean to “me”?  I don’t work at the UN nor am I a politician.  Yet, LGen Dallaire asked me – and every one of us in that room – “What criteria are you using to determine this is not your responsibility?”

Maybe it means that I need to take a moment to become more educated.  How many links do I click everyday?  Maybe I could click just one more…

International Coalition for The Responsibility to Protect (R2P)

UN: Office of the Special Advisor on the Prevention of Genocide